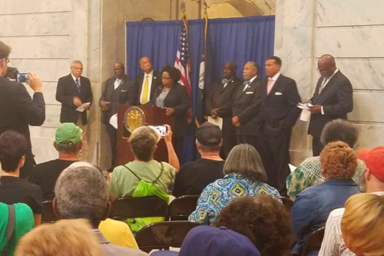 Dr. Betty Sue Griffin of the Kentucky Advisory Commission to the U.S. Office of Civil Rights, urged the Governor to move the Davis monument.

Kentucky Human Rights Commission, and the

On Wednesday, August 30, a group of African American lawmakers, pastors and advocacy groups  called for the removal of a Jefferson Davis statue in the Kentucky Capitol.  Kentucky's Capitol Rotunda displays five statues, including former President Abraham Lincoln and Jefferson Davis, the only president of the Confederacy.

The Kentucky Conference of the NAACP and other groups have tried twice before to have the statue removed but were unsuccessful. On August 21, the Kentucky African American Heritage Commission had sent a letter to Governor Matthew G. Bevin, calling for the removal of the statue. The Kentucky Historic Properties Advisory Commission governs the statues. Its members are appointed by the governor.

“This statue and many like it depicts the truth of the Civil War. But rather than serving as an everlasting symbol of white supremacy, let’s move it,” Griffin said. Senator Gerald Neal indicated that if Governor Bevin did not act to have the statue removed, that he would file a bill to require that it be moved, in the 2018 session of the Kentucky General Assembly.

Democratic State Rep. Reginald Meeks said it was time to "put aside the politics of the past" and remove the statue. Republican Gov. Matt Bevin has said the statue is an important reminder of the state's history.

Photos from the "Move the Monument" Rally