​​​​​Together Frankfort: Learn about the 2020 candidates for primary elections & volunteer your support!

Rick Sparks, a Democrat & the incumbent official, ran unopposed in the May primary. As no Republican candidate filed, he will be unopposed in November 2018.

The County Attorney serves as legal counsel for county government and represents the county when named as parties in legal actions. 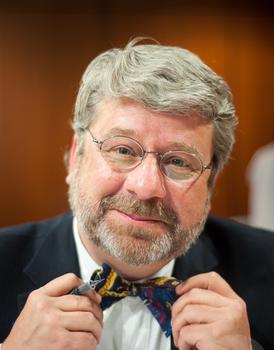 Duties & Responsibilities of the County Attorney

Kentucky's Legislative Research Commission's publication, Duties of Elected County Officials, developed and published a comprehensive guide for the public to better understand the role of county governments (Informational Bulletin No. 114, Revised November 2017) .  The information below is taken from that publication.

In 1976, the General Assembly modified the office of county attorney so that it became part of the unified and integrated prosecutorial system under the direction of the attorney general (KRS 15.700). Further, the county attorney became an ex officio special prosecutor of the commonwealth required to perform duties coextensive with the commonwealth, as directed by the attorney general (KRS 15.730). Although the nature of the office has changed, the duties remain substantially of the same classification:

The county attorney must attend the District Court in his or her county and prosecute all violations of criminal and penal law in the court’s jurisdiction. Further, the county attorney and the commonwealth’s attorney must cooperate in the enforcement of laws and, when necessary, assist each other in prosecution within their respective courts. They may agree to share or redistribute their prosecutorial duties in the Circuit and District Courts (KRS 15.725).

KRS 69.210 directs the county attorney to carry out prosecutorial duties for the commonwealth in the juvenile session of District Court in proceedings pursuant to KRS Chapter 610.

The attorney general may take action to disqualify a county attorney in a particular case and may direct any county attorney to act as a special prosecutor in cases that would normally be outside his or her jurisdiction (KRS 15.715, 15.730, and 15.735). The Rules of Criminal Procedure, promulgated by the Supreme Court of Kentucky, contain specific guidelines for the conduct of the county attorney’s prosecutorial duties.

The county attorney must bring action in the District Court to determine paternity when a request is made by the mother, putative father, child, or person or agency substantially contributing to the support of the child. If paternity has been determined, the county attorney or the Cabinet for Health and Family Services must bring action to enforce liabilities upon the request of an authorized complainant (KRS 406.021).

The county attorney is responsible for distributing to crime victims and witnesses a pamphlet, prepared by the attorney general, that explains how the criminal justice system works, how the victim or witness may increase protection from intimidation, and how the victim or witness can be notified of the release of a person from a juvenile detention facility, jail, or prison (KRS 15.245 and KRS Chapter 196).

Other duties under the Unified And Integrated Prosecutorial System, as well as the County Attorney's duties as legal advisor to Franklin County government, are provided in detail in the publication: Duties of Elected County Officials, prepared and published by the Kentucky Legislative Research Commission (download the document as a pdf file by clicking on this link.)