"Winners make policy and the losers go home,” our Senate Majority Leader Mitch McConnell (R-KY) smugly declared to a gathering of Anderson County constituents. The  business leaders gathered for a Chamber of Commerce event in Lawrenceburg, Kentucky, although some Together Frankfort members were able to get tickets.  Mary Lynn Collins, Together Frankfort's Co-Chair, made a point of buying a ticket early and made plans to ask questions. But the highly structured question & answer session ruled out any option for meaningful dialogue

As part of the 1,000+ so-called “losers” who protested outside, Together Frankfort's members did NOT go home. In fact, we were energized by others attending the protest who were unified in the message that, as McConnell's constituents, we deserved an opportunity to express our view to the Senator, in person.

Throughout late January and early February, 2017, Together Frankfort members had called, faxed, e-mailed, and written letters about his work to destroy health insurance secured through the Affordable Care Act. McConnell's telephone voice mailbox was notoriously full, always. At the rally, we were determined to be heard and declared we were not going home.

The Associated Press reported on the rally out McConnell's speaking venue in Lawrenceburg, Kentucky:

"Protesters crowded the American Legion Post 34 Fairgrounds, kept at bay by several police officers and a chain link fence. The crowd chanted “No ban, no wall, Mitch McConnell take our call” — a reference to full voicemail boxes at the senator’s offices — as McConnell drove past in a black SUV."

Our Senator Mitch McConnell, throughout the February Congressional recess, made great effort to escape and to avoid the constituents he is sworn to serve. McConnell had barely escaped his constituents in a waiting car as they greeted him at the airport. Alas, he found later, as he arrived home, that more than 200 more were waiting at his house.

Ernie Lewis, pictured above, who had also attention the national Women's March on Washington in January, protested that the Affordable Care Act should be improved, not repealed and replaced, as McConnell had pledged to do. 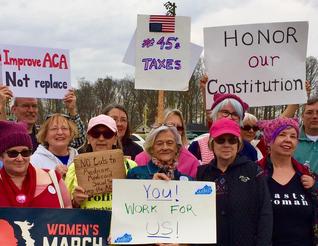 Together Frankfort's members traveled to Lawrenceburg, KY in February to protest Senator Mitch McConnell's failure to speak out about President Trump's unknown and unseen tax returns, along with  McConnell's pledge to repeal the Affordable Care Act. 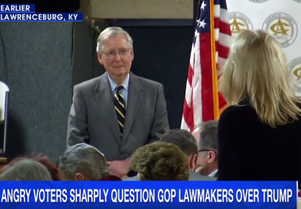 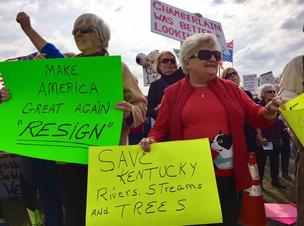 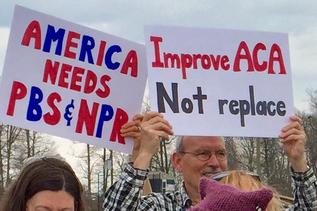