The office of Constable for Franklin County District 5 had no Primary Election, as only one candidate, incumbent Billy Mills, filed to run. Mills was unopposed in the November General Election and will continue in office in 2023.

Of the three candidates who filed for District 3 magistrate (Hank Schweickart; Richard Tanner; Joe Teasley), Richard Tanner won the May 2022 Primary Election, with  61.24% of the vote. Click here for more information about the May Primary for this office. Since no Republican filed for Magistrate District 5, Tanner was unopposed on the November 8, 2022 General Election ballot. Following a swearing-in during early January 2023, Tanner will serve a four year term. 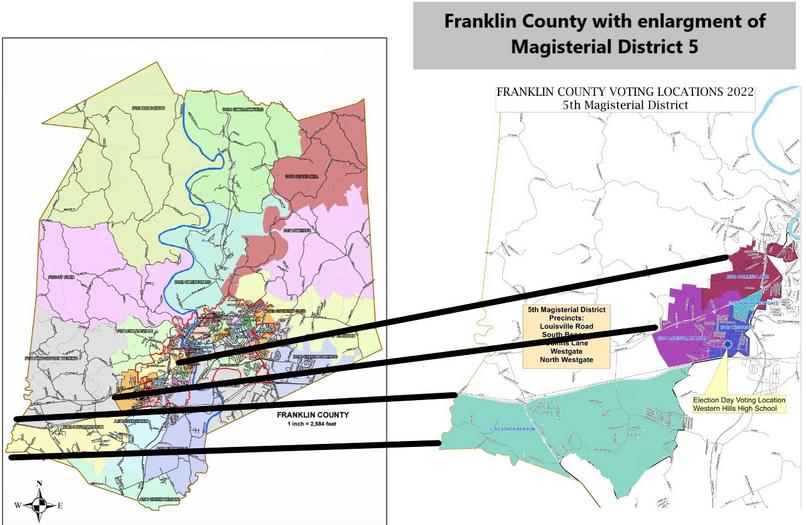 The page provides information about Franklin County's Magisterial District 5 & contact information for the Magistrate-Elect for District 5, Richard Tanner. Magisterial Districts are represented by "Justices of the Peace" or more commonly known as "Magistrates." The position is a partisan office, meaning that candidates must declare the political party for which they seek to be elected to represent.

The map of Franklin county, below, shows all 44 voting precincts. These precincts are grouped to form six (6) magisterial districts, which are required by law to include a population similar in number, in each district. District 5 (click here for a more detailed map of District 5) is made up of five (5) precincts: Collins Lane, Louisville Road, North Westgate, South Benson, and Westgate.  Voters in each of the six (6) magisterial districts elect one person to represent the district on the Franklin County Fiscal Court. The county's governing body, the Fiscal Court, also includes the County Judge Executive, who is elected by all voters in the county.

Candidates Speak Up!
We Appreciate Magistrate-Elect Tanner, so much, for Speaking Up!

​​To better understand local candidates' positions on various civic issues, Together Frankfort sent questionnaires to all candidates for selected local offices.  These included each candidate for:

District 3 Magistrate - Click here for Magistrate-Elect Tanner's Responses to the  Questionnaire. (Responses from other candidates can be found here, or on the page for each Fiscal Court District election.)

We are sincerely appreciative to the candidates who provided thoughtful responses, creative ideas, and timely information.  Please review their ideas .​​ 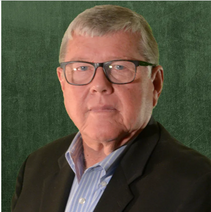