Get to know the candidates!

Work for those whom you support!!

The following links connect to the offices which Kentucky voters will see on the ballot in the November 8, 2022 General Election.  Please use this information to learn more about the office and its duties, the candidates for that office, and their platforms.

Almost every candidate has a website, Facebook page, twitter, even TikTok link to provide more information.  Now is the very best time to contact candidates & to learn more.  Share your ideas for how they could help our community, our county, our Commonwealth, & our nation.

Candidates for National Offices which 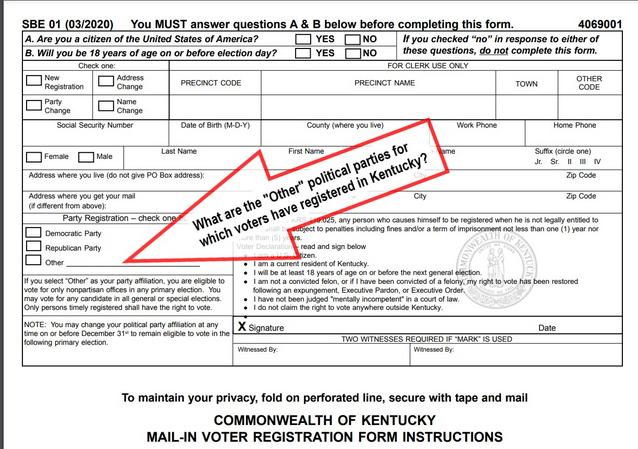 Kentucky's Voters in Political Parties Other than Democrat or Republican

​A Guide for Voters in Franklin County, Kentucky

The chart below provides the most recent report of the numbers of Democrats, Republicans, Other, Independent, Libertarian, Green, Constitution, Reform, and Socialist Workers party members for both Franklin County and the statewide in Kentucky.

Kentucky conducts political party primaries before each General Election, but only for the state's two major parties, Republicans and Democrats. In Primary Elections, voters may only vote for candidates of their same political affiliation and non-partisan candidates.

Kentucky State Board of Elections is required to track the numbers of voters registering in the following political parties and organizations.

Section 2. The requirement specifically lists, in "31 KAR 4:150.Tracking registration of voters identifying with political organizations and groups, and voters of independent status" the names of those entities which must be tracked. An important note is that "voters of independent status" is different from the "Independent Party," or the "Independent American Party." Those entities are registered organizations, with authorization from federal regulations. On the registration form for Kentucky's voter registration, the voter can simply state "independent," meaning that the voter aligns with no particular political organization, party, or entity.

Tracking Process.
(1) The board shall track the registration of voters identifying with political organizations and political groups known as:
(a) Constitution Party;
(b) Green Party;

(2) The board shall track the registration of voters of independent status.
(3)Information tracked under KRS 116.045(8) shall be retained by the board as a permanent record and in accordance with the requirements of the Department of Libraries and Archives, KRS 171.410 to 171.740 and 725 KAR Chapter 1.