WHEREAS, since our founding in January 2017, Together Frankfort has advocated for and supported equal rights for all people, and;

WHEREAS, Together Frankfort recognizes that an individual’s autonomy over his, her, or their own body remains one of the most fundamental rights in the Commonwealth of Kentucky and in the United States of America; and;

WHEREAS, we support our sister organization, the League of Women Voters of Kentucky, who stated that “An individual’s right to personal reproductive autonomy is central to an individual's dignity and liberty to determine one’s own life course. Liberty is defined as ‘the state of being free within society from oppressive restrictions imposed by authority on one's way of life.’"**

Now therefore, be it resolved that:

Section 1.  We find and, on this date, August, 29, 2022, declare that Together Frankfort strongly opposes Amendment 2 to the Kentucky Constitution which is on the ballot this November. Amendment 2, in combination with KRS 311.772, the “Trigger Law,” would deny the right to abortion in all cases including rape and incest. Additionally, Amendment 2 and all anti-choice statutes interfere with the freedom and liberty of individuals and families to make critical and timely decisions with the best medical advice without government interference. Women’s rights are human rights, and we will continue to educate and advocate until reproductive freedom is restored in Kentucky.

Section 2.  Furthermore, Together Frankfort’s leadership team, known as “Coordinators,” adopted the position of opposing proposed Amendment 2 to the Kentucky Constitution on the November ballot and will advocate for citizens to vote ‘NO’ on the amendment.

Section 3.  We encourage the citizens of Frankfort and Franklin County to review the proposed amendment and to speak out to the Frankfort Board of Commissioners, the Franklin County Fiscal Court, the Kentucky state legislators [Senate; House District 56; House District 57] who represent Franklin County, the leadership of the Kentucky General Assembly, and the Governor of the Commonwealth of Kentucky, sharing our opposition to Amendment #2 and encouraging these governing authorities to review this matter and adopt a statement of opposition.

Section 4.  Together Frankfort will transmit a copy of this resolution to the governmental entities named in Section 3 of this resolution and will encourage our elected officials in these entities to adopt a position of opposition to Constitutional Amendment #2. ​​​​​​

​​​*Source: The links to Constitional Amendment #2, or Amendment #2, throughout this page reference Kentucky House Bill 91 (21 RS HB 91) enacted by the 2021 Regular Session of the Kentucky General Assembly, and made available through the Kentucky Legislative Research Commission website. Since no official copies of Kentucky's 2022 General Election ballot are yet available,  Kentucky's legislation, as enacted, provides the most current official wording of language of the amendment as it will appear on the ballot in the November 8, 2022 Kentucky General Election. ​​​​​​

Together Frankfort needs YOU! ​​​​​

As Together Frankfort continues the important work of this challenging year 2022, we are looking ahead to 2023 (can you believe it?).  We request your involvement and, if possible, your support.  Click on the link, fill out the form, make a declaration of your Together Frankfort membership & involvement. 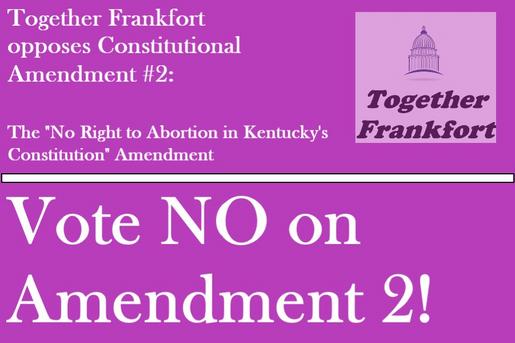 Together Frankfort encourages citizens across the Commonwealth to become informed about the proposed amendment to Kentucky's constitution, known as the "No Right to Abortion in Kentucky's Constitution Amendment."  The website, Ballotpedia, provides background & an overview of the proposed amendment, as well as listing the groups supporting the amendment and those opposed. We encourage citizens to read, watch podcasts, discuss with neighbors & friends, and consider the gravity of amending Kentucky's constitution with this proposal. Scan the QR code at right to learn more.

Constitutional Amendment 2 would amend the Bill of Rights of the Kentucky Constitution to state that nothing in the state constitution protects or secures a right to abortion or requires the funding of abortion.

On Monday, August 29, 2022, Together Frankfort's leadership team adopted the following resolution. We are encouraging other organizations to review & adopt similar policies in opposition to Constitutional Amendment #2 (download a copy of the resolution). In addition, we encourage individuals to Sign the Pledge to Oppose Amendment #2 on the November 8, 2022 ballot in the Kentucky General Election.​​​​​​​

​​What is Kentucky Constitutional Amendment 2*(see endnote, below),

the "No Right to Abortion in Constitution Amendment?"

A "yes" vote supports amending the Kentucky Constitution to state that nothing in the state constitution creates a right to abortion or requires government funding for abortion.

A "no" vote opposes amending the Kentucky Constitution to state that nothing in the state constitution creates a right to abortion or requires government funding for abortion.​​​​​​​​