Together Frankfort sent questionnaires to all candidates running to represent Franklin County in both HD 56 & HD 57. Of the two House candidates for HD 56, Candidate Grayson Vandegrift responded. Incumbent candidate Dan Fister did not respond to the questionnaire, nor to repeated attempts to contact him through email and& by phone.

Click here to learn about Candidate Vandegrift's background and campaign issues.  Click this link for information about the role of a House Member.

*(i) indicates an incumbent candidate, i.e. someone who already holds the office and is running for re-election.​ 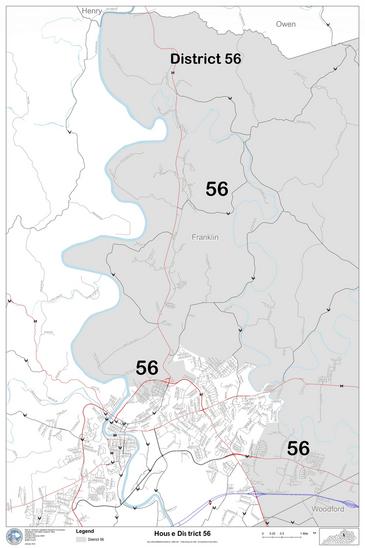 Shaded area, in the map above, represents all parts of House District 56: parts of Franklin, Jessamine, Mercer, & all of Woodford.

Shaded area, in the larger map, represents the portion of House District 56 which is in Franklin County

​What Did Candidate Grayson Vandegrift Tell Us?

How did the candidates reply to the questions? Together Frankfort asked questions concerning the six (6) issue areas below:

Questions from Together Frankfort are in purple text; candidates' response are in black.

~~ Together Frankfort: Quality of Life for All Citizens ~~

Together Frankfort: What proposals would you make to improve the quality of life for the citizens of Frankfort and Franklin County?

Candidate Grayson Vandegrift: I would prioritize keeping our tax dollars in Franklin County, rather than sending money from our public school districts to privately-run, for-profit charter schools located 100 miles away from Franklin County, as House Bill 9 does.

My opponent voted for this bill, I would not have. I would also vote for a cost of living adjustment for state retirees, who haven’t had one in 11 years. The current supermajority decided not to give a much-deserved raise to teachers and they decided not to give a COLA to state retirees but did give a raise to themselves. I believe quality of life starts with putting public servants back in public office.

Together Frankfort: Describe your vision for sustainable economic growth in Franklin County.

Candidate Grayson Vandegrift:  I’ve been the mayor of Midway in Woodford County the last 8 years, and sustainable economic growth is the #1 issue there. We brought all voices to the table, made sure all stakeholders felt they had a seat, and then we moved forward with our goals and objectives.

Eight years later we increased revenue 300% through job creation without spoiling what makes us who we are. We used new revenue to invest in sanitary sewer, water, and storm sewer infrastructure, and we were even able to reduce regressive taxes like property tax and sewer rates that affect poor and middle-class families the most. I believe Franklin County has the great minds and engaged citizenry to do that, we just need to work together and take our time to get everyone at the table first.

Together Frankfort: What could our community do to address climate change?

Candidate Grayson Vandegrift:  Each individual can do our part to address climate change, including taking notice of our carbon footprint as individuals. But state and local leaders can help by investing in parks and walkability/bike-ability programs as well as in public transportation that not only helps reduce our footprint, but provides reliable transportation for seniors and those who don’t have the resources they need to get to and from work.

Together Frankfort: What are your priorities for Planning and Zoning?

Candidate Grayson Vandegrift: Planning and Zoning is a local matter but as a state representative I will certainly be engaged in everything happening on the ground. As a local leader I understand the complexities of balancing our love of what makes us who we are while also attracting smart growth that provides opportunity and much needed local revenue to improve aging infrastructure.

Together Frankfort: In what circumstances would you support using Tax Increment Financing (TIF)?

Candidate Grayson Vandegrift: I’m not a fan of tax-increment financing. A developer proposed we use one to kickstart our industrial park in Woodford County when it was struggling ten years ago, but we felt it seemed like a giveaway to developers at the cost of the local taxpayer. We turned our industrial park around without a TIF and I would suggest others to avoid them when at all possible.

Together Frankfort: Voting - Only 33% of eligible Franklin County voters participated in the last election and that was considered a good turnout. What do you think can be done to increase voter turnout and engagement?

Candidate Grayson Vandegrift: I wish we could have more forums between candidates so that voters got a chance to see and hear their candidates side by side. I think it’s a shame that no forum between myself and my opponent will take place. I applaud all civic organizations like this one who are attempting to give voters vital information before they cast their ballot.

Together Frankfort: What is your opinion about election security in Franklin County?

Candidate Grayson Vandegrift:  Election security in Frankfort is probably the safest it’s ever been. County Clerks in Kentucky have been the victim of attacks by overzealous politicians who care more about making a name for themselves than they do about the truth. When I ask certain politicians for their evidence of any kind of election fraud, they tell me the evidence “is coming.” It’s been two years, where is it?

The truth is, we have safe and secure elections, with folks who work very hard to make that happen, and poll workers who spend 16 hours on election day making sure our democracy functions properly, despite those who wish to destroy its integrity.

Together Frankfort: What specific measures do you believe could reduce gun violence in Kentucky and if elected, what would you do to make sure those measures are put in place?

Candidate Grayson Vandegrift: I believe in the 2nd amendment, but I also believe in common sense measures to curb gun violence. There is no reason on earth why someone should be able to get an untraceable gun, we have to close any and all loopholes that allow this to happen. It’s true that 2/3 of gun deaths in Kentucky are from death by suicide. We need to invest in more mental health programs and remove the stigma for those who struggle with internal battles that exist due to no fault of their own. No one should have to suffer in silence, and we’ve let too many do just that.

Together Frankfort: Suicides account for 66% of all gun deaths in Kentucky. Do you have proposals that would reduce those deaths?

Candidate Grayson Vandegrift: It’s true that 2/3 of gun deaths in Kentucky are from death by suicide. We need to invest in more mental health programs and remove the stigma for those who struggle with internal battles that exist due to no fault of their own. No one should have to suffer in silence, and we’ve let too many do just that.

Together Frankfort: The federal government has just passed legislation that would send money to Kentucky for gun violence prevention--specifically for enacting a red flag law or something similar. How would you propose to spend that money to prevent gun violence in our commonwealth?

Together Frankfort: What is your position on Dark Money?

Candidate Grayson Vandegrift: Dark money should not be permitted in our political system and yet it dominates it. I’m proud to say that not a dollar I’ve raised is from anything unaccounted for. If you visit kref.ky.gov you can search any candidate running for office in Franklin County, and you can see every single one of the hundreds and hundreds of people who have donated to my campaign.

Candidate Grayson Vandegrift: If you visit kref.ky.gov you can search any candidate running for office in Franklin County, and you can see every single one of the hundreds and hundreds of people who have donated to my campaign.

Together Frankfort: What is your position on reproductive health care for women and Constitutional Amendment #2?

Candidate Grayson Vandegrift:  My opponent does not believe there should be any exceptions to the current ban on abortion in Kentucky, and voted against an amendment that would have allowed exceptions in the case of rape and incest. I think that is too extreme, and I will vote to allow exceptions in the cases of rape, incest, and health of the mother. I will also vote no on both amendments on this year’s ballot. Amendment 2 would get women killed I’m afraid, as the changes to the constitution they propose wouldn’t protect a woman who, for example, had an ectopic pregnancy, which is not only incompatible with life but also one of the most dangerous things that can happen to a woman. It’s too extreme for Kentucky.

Together Frankfort: What is your position on expanding mental health care in Franklin County?

Together Frankfort: Would you, if elected, tackle our affordable housing crisis by supporting a city/county ordinance that adopts the Uniform Residential Landlord Tenant Act (URLTA) to define the rights of renting citizens and families and landlords, and follow the lead of other towns and cities by adopting regulations on Airbnb and other short-term rentals?

Candidate Grayson Vandegrift:Housing is a big issue everywhere, and just like in my home county of Woodford, I would support local efforts to update regulations on Air BnB’s, which in the case of Woodford, didn’t even exist when the current laws on the books were written. Much of this work has to be done on the local level, but as a state representative I will fight hard to make sure that state regulations don’t get in the way of what local leaders in Franklin County feel serves the people best. I also support anything that clearly defines the rights of renters, families, and landlords.

Thank you, Candidate Vandergrift, for responding to Together Frankfort's questionnaire.

For readers interested in discussing these issues further with this candidate, 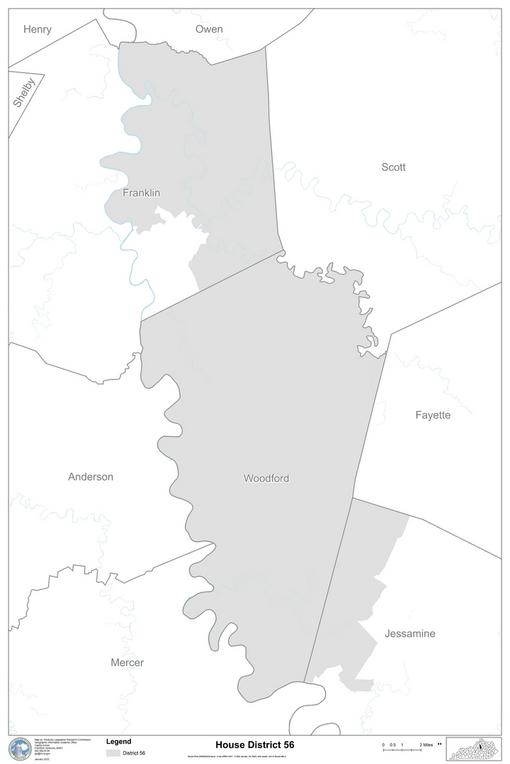 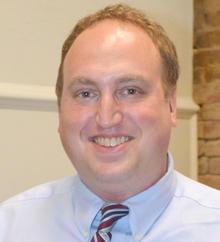 Where is House District 56?